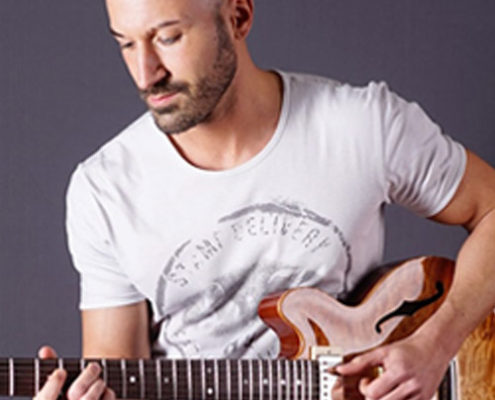 Professional guitarist Francesco Benotti is active as a session musician and as a guitar teacher.
Francesco Benotti, born in 1983, fell in love with the guitar at the age of 16 and took a learning path with private lessons; later, he enrolled at CPM in Milan, where in 2006 he obtained a “Rock Guitar Master of Donato Begotti”.
Always along with Donato Begotti, he collaborated to the transcript of the steps of the teaching method “Private Lesson rhythm & Lead” .In 2009, he attended a guitar master at the Musician Institute of Los Angeles; at the moment Francesco attends improvement classes with maestro Luciano Zadro.
Since 2006, Francesco also began teaching modern guitar and music. He currently teaches at the “Massive Arts Music Academy” in Milan (MI) and at the “MPA Academy” of Robecchetto con Induno (MI); he was also a teacher at “Fonderia Music Academy” of Vigliano Biellese (BI), “My Sound ex Suoneria” of Settimo Torinese (TO) and at “the Università Popolare of Biella.” From 2009 to 2011, he was an authorized teacher for the courses RLS Extreme of Donato Begotti.
From January of 2015 Francesco became a Guitar coach of the artist Fedez.
Since 2011, Francesco owns Clinic and performs Demonstrator activities in various fairs in this sector.
Since 2012, Francesco works as a session man in a recording studio.
Francesco is currently engaged in several live projects including: “On Top” (Cover Pop – RnB) with Mario Natale, Paola Caridi and Matteo Balani, “The Teachers” (Cover Funk – Soul) led by Max Tempia and “Time Travel” (Cover Dance).
Francesco also collaborates with the singer Stefania “Alteria” Bianchi along with: Manuel Signoretto, Fernando De Luca and Alessandro Carlà in a live project for Conventions and private events.
In 2013 and 2014, Francesco participated as a session musician in the Italian Tour of the American singer Susan Didrichsen (Spyro Gira, Wilson Pickett, Enya).
Since 2013, Francesco Benotti collaborates with the journalist Riccardo Gerbi and conducts the video section “Guitarist” in the Sounds and Tools site.
Since 2012, Francesco Benotti became a MOV Guitars endorser and from 2014, he became a D’Addario endorser. 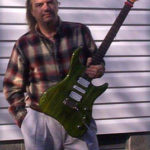 Alex Usai
Al fine di fornire la migliore esperienza online questo sito utilizza i cookies. Utilizzando il nostro sito, l'utente accetta il nostro utilizzo da parte dei cookie.
We use cookies to ensure that we give you the best experience on our website. If you continue to use this site we will assume that you are happy with it.Ok
Scroll to top