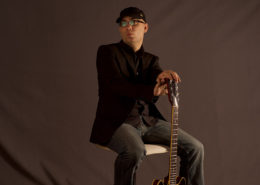 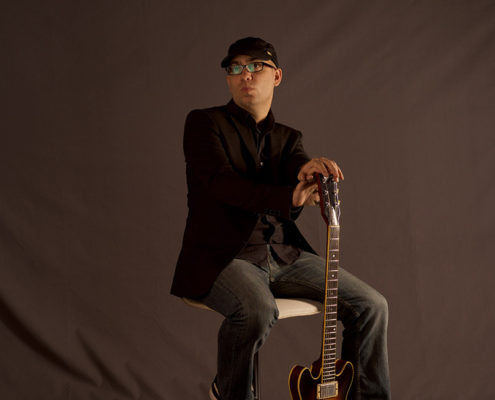 He was born in Milan at 16 of February, in 1983, and at the age of 6, he approached the music under the guidance of his father. At the age of 14, he graduated from the academy H.villa Lobos of Paderno Dugnano. At the same year, he enrolled at the Civic Jazz Courses of Milan, from where he graduated in 2003.
In this period, he is lucky enough to play with various formations such as The Guitar Ensemble directed by maestro Franco Cerri, Gianni Bedori Quintet, the Dixieland Band directed by Maestro Rossano Sportiello and the Civic Jazz Band. In 2003 he participated with the guitar ensemble in the incision of the disk “Yesterday and Today” of Franco Cerri, playing in three tracks. After a little time he even participated in the disc “Live at Paderno D’adda” With the Dixieland band of Rossano Sportiello and Franco Cerri.
In 2007, he joins the Sugar Blue Band, the band that accompanies the blues harmonica player Sugar Blue with whom he had the chance of playing in the most important Italian clubs and in a large number of International blues festivals in Europe.
He participated in the tours of the Dik Dik from 2005 to 2010 and recorded the Cd “Sold Out”.
In 2010, he joins the Milan group Foundaction with which he performed at Umbria Jazz 2010 and 2011, at the Porretta Soul Festival and at the Narni Black Festival 2010 and 2011. During these festivals, he opened the concerts of Maceo Parker, Tower Of Power, Chaka Khan and Dee Dee Bridgewater.
In 2009, he won the competition “Young Jazz Talents” of the city of Treviglio.
In 2010, he won the prestigious competition “Massimo Urbani” and next year the “Chicco Bettinardi” 2011 competition. 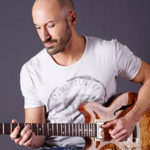 Danilo Ciamprone
Al fine di fornire la migliore esperienza online questo sito utilizza i cookies. Utilizzando il nostro sito, l'utente accetta il nostro utilizzo da parte dei cookie.
We use cookies to ensure that we give you the best experience on our website. If you continue to use this site we will assume that you are happy with it.Ok
Scroll to top